There is a meme going around discussions amongst liberals lately: 14 million people have left the Democratic Party since the nomination of Hillary Clinton. It is chiefly being used by those who want to split off and form a new party, feeling that the DNC is so corrupt as to be absolutely irredeemable.

Is the number real? And where did it come from?

The answers to those questions are, “No,” and, “From someone’s ass.”

Okay, contempt for those who don’t respect logic aside, the actual answers to those questions are, “The number is ‘real’ in the sense that it exists, but not in that it is accurate or meaningful,” and, “It came from a dishonest misreading of a Gallup poll.”

The poll is a Gallup tracking poll which measures party affiliation by asking respondents, “In politics, as of today, do you consider yourself a Republican, a Democrat or an independent?”

The conclusion: People are disgusted with the Democratic Party. Hillary was such a toxic candidate, party numbers are at an all-time low. We should form a new party!

Well, isn’t that accurate? It’s a Gallup poll—they’re respectable. The 200 million figure is reliable. Why shouldn’t the conclusion be accurate?

This is an excellent example of the old saying, “Figures don’t lie, but liars figure.” Let me explain.

Here’s a graphic representation of the numbers that were used: 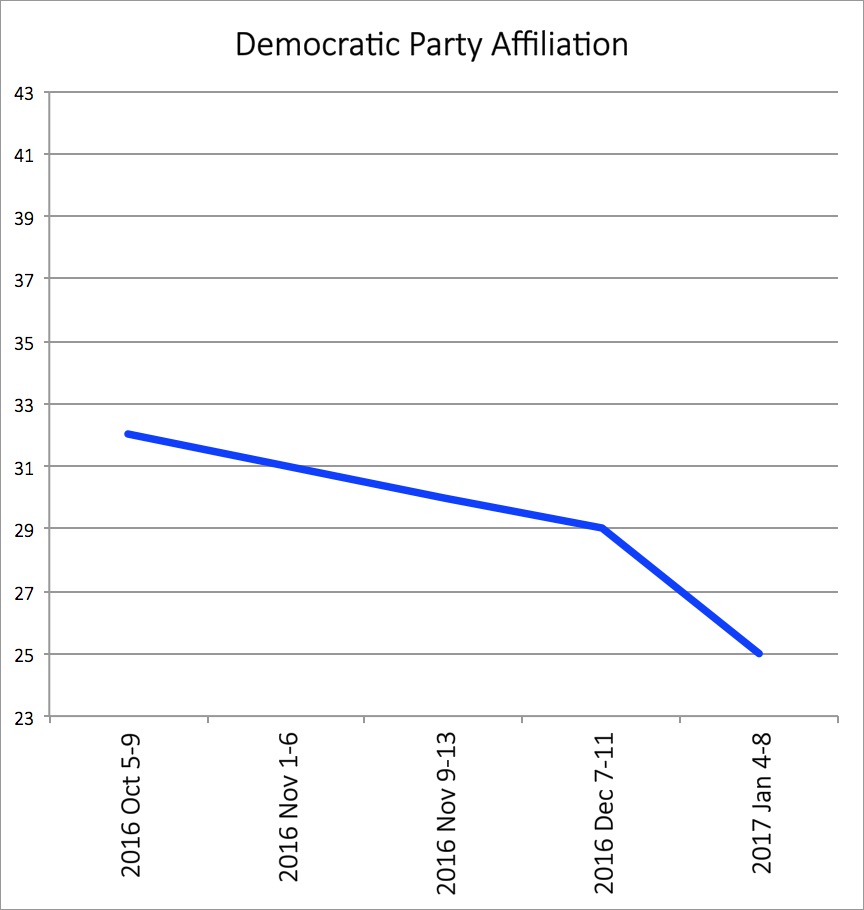 Looks pretty clear-cut, right? However, let’s also look at the numbers from the same poll, this time between December 2012, after Obama won re-election, and November of 2013, almost a year later:

Wow! Obama was toxic, too! After he was re-elected, party affiliation dropped from 38% down to 28%! That’s an even bigger drop than now! A whole 20 million people fled the party in a massive exodus, disgusted by Obama and the Democrats!

You remember that, right? The mass exodus of 20 million Democrats in 2012? It was like Moses and the Hebrews leaving Egypt! Huge masses bringing all that they could carry or put onto the backs of camels, and all that. Let our people go!

No, of course you don’t remember that, because it didn’t happen.

So, if I can show charts which have a grand total of 78 million people leaving the party, how is it that the Democratic Party has anyone left in it at all?

The answer: the same way climate change deniers claimed that there was a “pause” in global temperature increases. That is to say, by reading the numbers dishonestly.

Here’s the whole chart, from 2004 to 2017. Note that time each tick is a new poll, but not an equal measure of time, to the time axis is a little distorted: 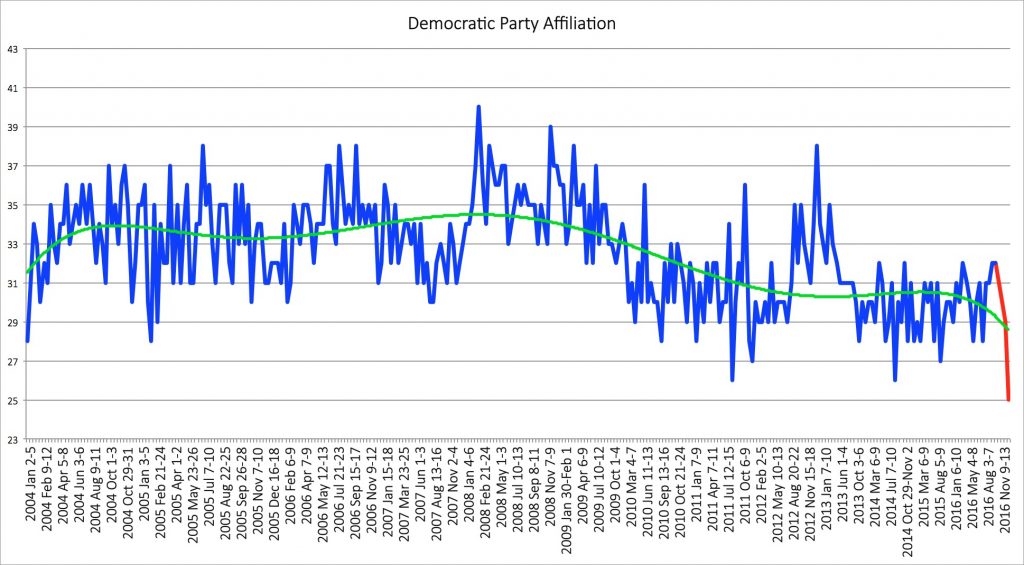 As you can see, the chart is packed with peaks and valleys. The red line at the end is the data from which the 14 million number comes from. There is a trendline in green, but the ends are distorted by the data being cut off; the actual trend leading to the present is truthfully unknown, as we don’t know where the next number is, and the final low result prejudices the trend.

If I take a 2-, 4-, or 6-month excerpt from anywhere the chart, moving from a peak to a valley, or a valley to a peak, I could make any claim I damn wanted. Obama brings tens of millions to the party! Tens of millions depart the Democrats in disgust at Obama! Hillary is a party hero! She’s a monster! People love the DNC! People hate the DNC!

This is what the climate change deniers did: they selectively cherry-picked a high peak, and then a low that cam years later, and—voila!—no climate change! Same thing. Liars figure.

So, if the Draft Bernie/Splinter Party crowd were to state the facts honestly, this would be their claim:

If we ignore the larger trend and selectively pick our data, we can claim that 14 million people left the party, with a margin of error of 12 million people. Except that most of those people will likely “return” in the next issue of the poll numbers.

See, that doesn’t have the right zing to it. Better to just lie:

So, what’s the real takeaway from the poll? Well, first of all, people tend to get excited about the party before elections, and less so afterwards, so a dip is expected. The most recent number is a bigger drop than normal—though not unprecedented—but the real story will be told over the next few years, as enough data comes in to make a reliable assessment over time.

Hell, considering that the latest data point came before Trump’s inauguration, considering that since Trump took office there has been massive protests by liberals, and that Chuck Schumer and Elizabeth Warren have been putting up a very public fight… it is not inconceivable that the next poll could show an unusually high surge.

But we can’t say yet. The data is not in. Until it is, the short-term numbers are simply meaningless.

As is the claim that 14 million people “left” the party.

35 thoughts on “How to Make Numbers Lie: 14 Million Democrats Did Not “Leave the Party””